6 Traditional Greek Food Dishes You Must Try (In Greece!) 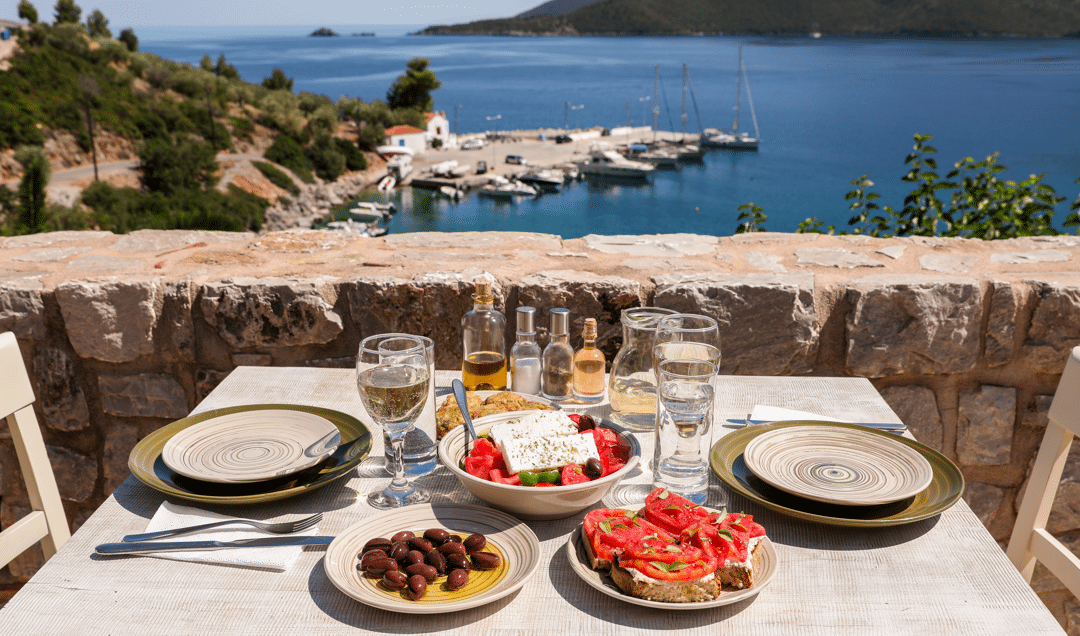 Greek cuisine is some of the best food in the world, and you won’t get any better traditional Greek food than in Greece. Here are 6 dishes you must try while in Greece.

Traditional Greek food is some of the best in the world. It’s also one of the healthiest cuisines around.

Olives, herbs, fresh seafood, and vegetable are staples of Greek cuisine. Over the centuries, Greek chefs have mastered the art of combining these into simple yet luxurious dishes.

These are some of the Greek foods you must try during your vacation in this Mediterranean paradise. 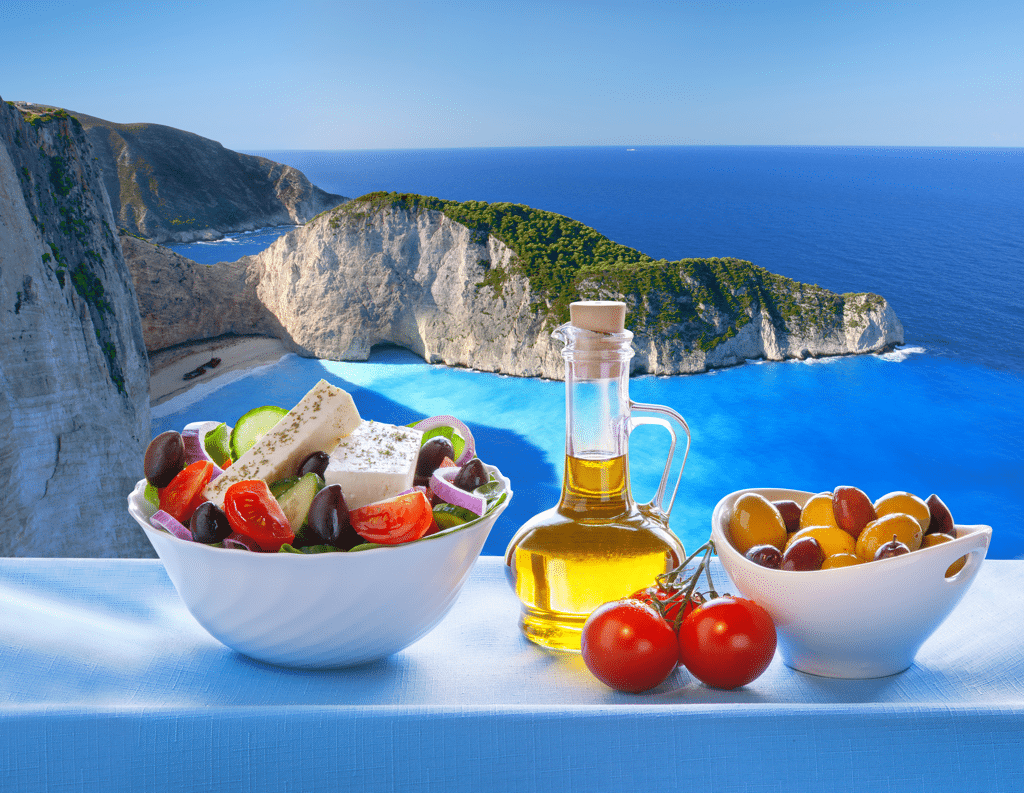 You haven’t had a true Greek Salad until you’ve eaten it in Greece. You’ll find this dish on offer at every restaurant in town and it’s nothing like the cheap imitations found abroad.

Tomatoes, Kalamata olives, cucumber, green bell peppers, and a chunk of feta cheese are the only ingredients. No bottled dressing or lettuce features here.

Enjoy it as a starter or side dish with the option to add vinegar, salt, pepper, and olive oil to taste.

Gyros are a popular Greek food choice and you’ll find them wherever you go in the country.

They’re a great grab-and-go delicacy. Perfect to nibble on during a break in your Mykonos activities or while meandering among historic sites on the mainland.

Although there are no strict rules governing the contents of a gyro, the basic ingredient is always freshly baked pita bread.

The bread wraps around a thinly-sliced protein of your choice, usually pork or chicken that has been slow-roasted on a rotisserie. Fries, tomato, onion and a drizzle of Tzatziki complete the picture.

Tzatziki on its own is an art form in Greece. It’s hard to believe this delectable sauce contains only four ingredients – thick yogurt, garlic, olive oil, and dill.

Souvlaki is a well-known Greek dish and on a par with gyros as a favorite street food. The name refers to the meat used in this dish which is always marinated, skewered and grilled over an open flame.

Pork is the most commonly used meat in souvlaki although you can have it with chicken, beef, lamb, or fish in some places.

There are 3 ways you can eat souvlaki:

Octopus is Greece’s most celebrated seafood sensation. You can eat it in a stew, as a salad or with pasta. The grilled version of octopus is the darling of the Greek population. This dish is painstakingly tenderized, braised and char-grilled to perfection before serving.

The best way to get a taste of Greek seafood is to order a seafood platter. You’ll end up with a selection of the day’s catch, fresh from the ocean. Sardines, cuttlefish, mussels, prawns and marinated octopus are usually featured. A dash of lemon, garlic, parsley, dill, and oregano bring out the flavors of this meal.

Wherever you go in Greece you’ll find a new way to enjoy seafood according to local specialties.

Keftedes comes in many forms. You will usually find them as part of a meze platter. They are also served as a main dish with Basmati rice or pita bread with tzatziki and Greek salad on the side.

Pre-marinated minced pork is usually the main ingredient of the meat version. Parsley, oregano, bread, potatoes, and cinnamon and shaped into balls. These are deep-fried to create comfort-food of the highest order.

Tomaotokeftedes are a version of keftedes, which looks a lot like fritters. They are a popular meze option or vegetarian main course choice, particularly in Syros and Santorini. Tomato, mint, and onion are the main ingredients in these crunchy bites.

Another vegetarian winner, courgette keftedes are a regular feature on meze platters all over Greece. These delicious balls of goodness are crunchy on the outside with a silky smooth creamy center. 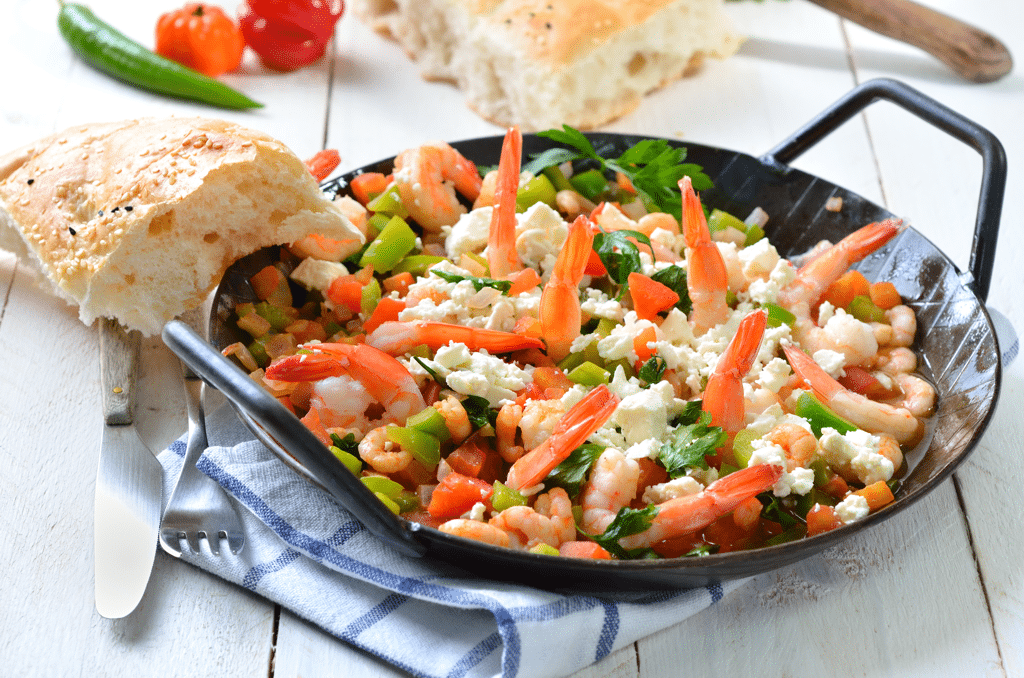 The term saganaki refers loosely to food fried in a two-handled pan, but the term has become synonymous with fried cheese. Haloumi, kefalograviera, and graviera are the usual types of cheese used to create this delicacy. It’s hard to believe that so much deliciousness can ensue from frying up some cheese with a little flour.

Shrimp saganaki, which is shrimp and feat fried together is another popular option.

Making the Most of Traditional Greek Food

Traditionally, mealtimes in Greece are a social event. Family and friends spend time eating slowly. They savor every morsel and indulge in friendly banter for hours during the meal.

It’s common to eat Greek food without the encumbrance of cutlery. Greek food is usually served in bite-size portions or wrapped up ready for consumption.

To make the most of the country’s mild Mediterranean climate, meals are often enjoyed at outside tables. You’ll find refreshing frappe (Greek iced coffee) and Ellinikos (strong roast coffee) is always close at hand come mealtimes. Sambuca, Raki or Retsina wine might also make an appearance.

Desserts are sweet as can be with pastry, nuts, honey, and semolina being the stars of the show. Halva, Kataifi, Loukoumades, and Baklava are some of the best.

Traditional Greek food is only one of the delights that await on your European travels. Sensory enjoyments are to be had wherever you roam on this historic continent.

Get in touch to start planning your next luxury adventure and get a taste of Europe at its finest.