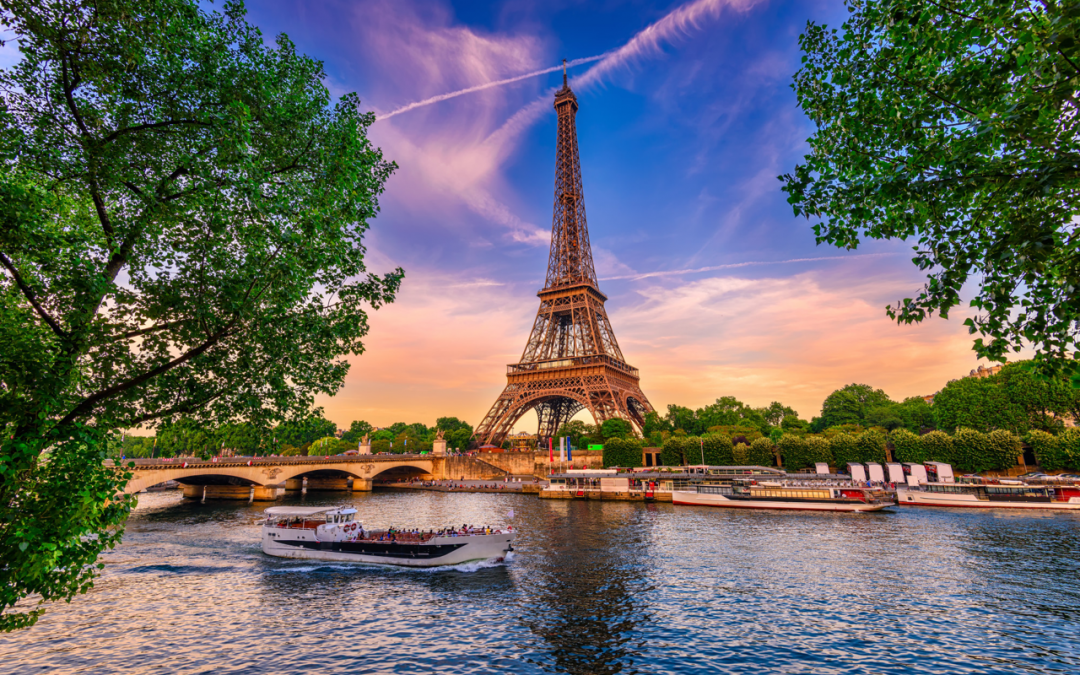 A visit to the beautiful, historic city of Paris at any time of year will be one to remember. Experiencing summer in Paris is even more special.

‘I love Paris in the summer when it sizzles,’ says the Cole Porter song made famous by Frank Sinatra. It’s impossible not to be captivated by the beauty of the French capital.

The iconic landmarks from the Eiffel Tower to the Arc de Triomphe would arouse excitement in even the hardest of hearts.

When’s the best time to visit Paris? As the song says, any season is wonderful. But summer in Paris adds a little extra and will make your trip even more special. It should top the list of your ultimate European adventure. 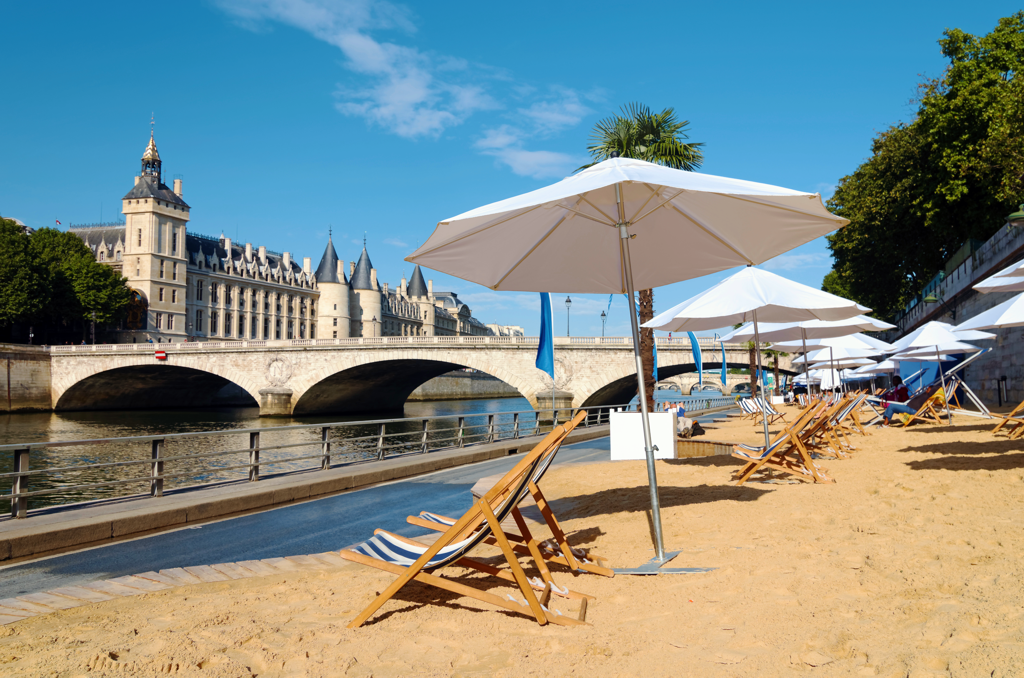 ‘Hold on one minute,’ I hear you say, ‘Paris is nowhere near the sea!’ True, but that won’t stop you from topping up your tan on the sand.

Each summer, the right bank of the River Seine which divides the French capital takes on the look of a typical seaside resort. It’s all part of the Paris Plages (Paris Beaches) project.

Initially, this was set up for Parisians unable to escape to the sea over the summer months. So, a huge stretch of the riverbank is covered in sand. There are even parasols, deckchairs and palm trees.

There are plenty of events for children and grown-ups. You can even take a dip in the La Vilette canal basin. The artificial beach is the perfect place to sit back and enjoy an ice cream or cocktail under the hot French sun.

More things to do on the Seine

The River Seine crosses Paris from west to east. The left bank, or rive gauche, is on the south side of the capital and the right bank to the north.

It’s worth mentioning that Paris is divided into twenty numbered districts known as ‘arrondissements.’ You may have heard of people referring to areas such as the ‘sixth’ or the ‘fourth,’ for example.

Back to the river, and a boat ride along the Seine is one of the best ways to see the city’s bridges. You’ll also be able to take in the breathtaking architecture, especially the area around the Quai D’Orsay. Combine your trip with lunch or dinner on board.

A Picnic in the Park

Many Parisians will be taking their vacations in August and that’s when there really is a noticeable drop in the city’s population. It’s the perfect time to take advantage of the city’s parks and gardens.

For sheer size and beauty, it’s difficult to beat the Jardin du Luxembourg. It’s located near to the Latin Quarter and the sixth arrondissement. Created in 1612, it was inspired by the Bobili Gardens in Italy.

Things to Do in the Jardin du Luxembourg

This attraction covers a vast area which is split into French and English gardens. There are more than a hundred statues scattered throughout. You will even find an orchard, forest, and a small lake.

You can learn about bee-keeping here too. There’ll be plenty of activities from puppet shows and rides to free photography exhibitions. The great thing is that you’ll never be stuck for things to do in Paris.

Get into the spirit of the French way of life by bringing a baguette, some camembert and a bottle (or two) of Beaujolais for a long relaxing lunch. A picnic at the Champ de Mars right next to the Eiffel Tower would be another perfect spot.

Join in the Bastille Day Celebrations

July 14th is France’s national day and marks the beginning of the country’s democracy.

It dates back to 1789 and the storming of the Bastille which was a turning point of the French Revolution. It also marks the Fête de la Fédération which celebrated the unity of the French people on July 14th the following year.

There’ll be a massive military parade along the city’s Champs-Elysées which stretches down from the Arc de Triomphe. This is attended by the French President and a host of foreign dignitaries.

In the evening there’ll be a free concert on the Champ de Mars and the city’s only annual firework display. These are not to be missed. The river is a key vantage point from which to watch the fireworks.

The Museums Have Air Conditioning!

Paris can get very hot in the summer but that shouldn’t put you off visiting one of the many museums. The Louvre is a must-see attraction and houses Leonardo da Vinci’s famous painting, the Mona Lisa.

This museum displays almost four hundred thousand objects. It’s wise to do a bit of research beforehand and decide on what you’d actually like to see.

You can combine a trip to the Louvre with a visit to the Tuileries Garden. This is located between the Louvre and the Place de la Concorde in Paris’s first arrondissement.

Not to be missed either is the Pompidou Center. It’s situated near Les Halles and the trendy Le Marais district. It houses the largest museum of modern art in Europe. It’s worth a visit simply to view and take in its high-tech exterior design.

This famous antique and second-hand market is made up of a sprawling network of warehouses, stands, and alleyways on the northern edge of the city. It’s the fourth most visited attraction in France and is open at weekends.

The Marché Vernaison is one of the markets nearest to Porte de Clignancourt Metro station. With over three hundred stalls, here you’ll find toys, glassware, and scientific objects.

Next up is the Marché Dauphine. Built in 1991, it is one of Saint-Ouen’s largest markets. It’s made its name by selling antiques from the 17th and 18th century. You’ll also find vintage records, clothing, and prints.

Then there is the Marché Biron. Here you’ll find plenty of Asian art from the past two hundred years. There are also Art Deco ornaments on sale that were made in Paris.

Finally, there’s the Marché Paul Bert Serpette. It’s the trendiest of the markets with lots of avant-garde interior design items on offer.

Soak up the Romantic Café Culture

Paris isn’t known as the city of love for nothing. It’s made for wandering around and stopping at the occasional café where you can sit and watch the world go by.

The city is synonymous with romance, and the perfect place to enjoy your summer getaway in style.

The Latin quarter and its meandering alleys and streets are steeped in atmosphere. It’s home to the Sorbonne University and student-filled cafés.

From there it’s a short walk to the Boulevard Saint-Germain. In this area, you’ll find some of the most famous cafés in the country from Les Deux Magots to Saint Pearl. Both are the perfect places to people watch and soak up the Parisian ambiance.

A Walk Through Montmartre

Montmartre is known as the mountain of martyrs, a large hill in Paris’s 18th arrondissement. Here you’ll be walking in the footsteps of Vincent Van Gogh and Pablo Picasso.

From this vantage point, you’ll get amazing views of the rest of the city and be able to take in the stunning bohemian architecture.

The famous white-colored Sacré-Coeur is located here and is probably the most iconic attraction in the area. This Roman Catholic church, a minor basilica, has become the second most visited monument in Paris.

Montmartre is also home to the Moulin Rouge. This famous cabaret was founded in the late nineteenth century and became renowned as the birthplace of the can-can. It’s still entertaining the crowds today.

Shop till You Drop

June and July are a key time for shops in Paris to hold their sales. That means it’s the perfect opportunity to snap up a bargain with many prices slashed.

Sales are still state-regulated in France with one period in summer. Department stores, designer outlets, and fashion boutiques will be clearing out old stock. They want to do this before the exodus of locals from the city for the summer break.

The best time to shop is normally right in the middle of the sale period when retailers sometimes make further reductions. 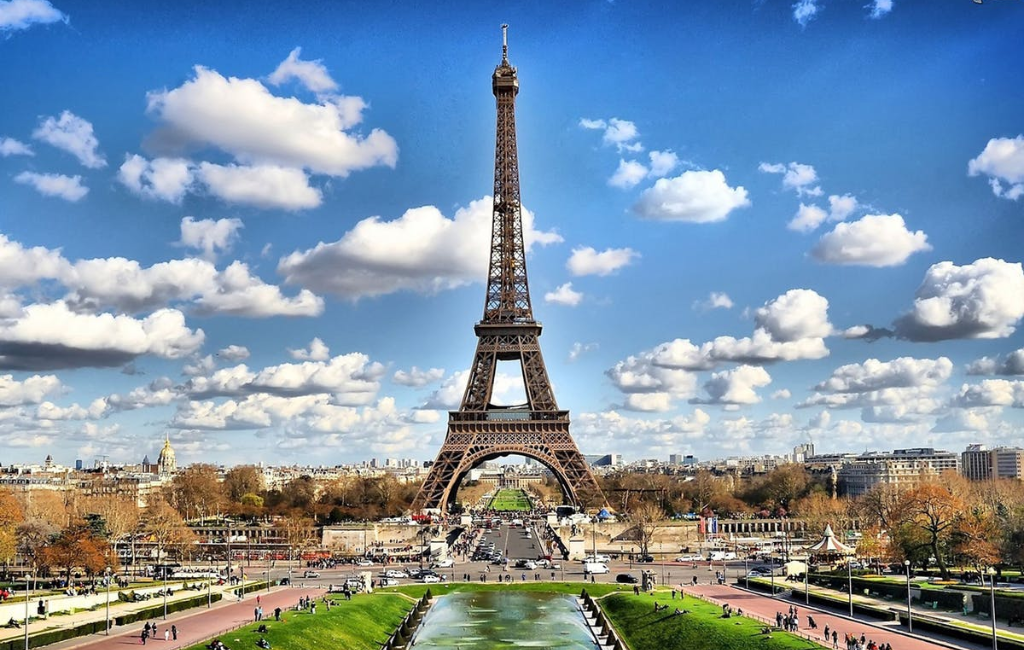 No trip to Paris would be complete without a visit to the iconic tower. Built in the late nineteenth century, it’s another great place to take in the views of the city.

There are three levels for visitors, and you’ll find restaurants on the first and second levels. The upper platform on the top level stands at almost a thousand feet.

You can either work off those croissants by climbing the stairs to the first and second levels or take the elevator.

There are some real advantages to passing the summer in Paris. You can be there for France’s national day on July 14th and enjoy wandering the city’s beautiful streets when the weather’s at its best.